Foreign Activism, Leadership Failures and the Fallacy of Externalizing Blame in South Sudan

"If we let our people suffer or die, no matter how we profess to love them, their suffering or death becomes a proof of our abject failure. " 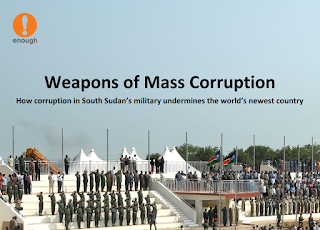 It is as clear as daylight that any sovereign state in the world only pursues its interests for either pure political and ideological reasons, or for the interest of its citizen, normative or material. This is the essentialist nature of any foreign policy enterprise. So any country in the world reserves the right, within reason, to protect its citizens and its interest in ways it deems appropriate. South Sudan isn't an exception.

However, there is an essential difference in the manner in which states undertake this statist interest. Rogues states, especially in Africa and the Middle East, usually pursue this state interest in total regard of universal moral and ethical standards. Citizens are persecuted or killed in the name of sovereignty. Any criticism of human rights violations by international activist organizations or individuals is rationalized as meddling in the "internal affairs of our country." For South Sudan, the ruling SPLM dismisses human rights concerns and leadership problems as 'regime change agenda."

As long as the folks in power prolong their stay in power, the manner in which their state interest is pursued is not evaluated. Such closed, uncountable system leads to oppressive and dictatorial political cultures. For rogue states, of which South Sudan has become given its treatment of critical citizens, what counts as necessary is the result required. And this result is the perpetual longevity of the rule of the folks in power regardless of what they do to stay there. Morality, accountability, responsibility to citizens become inconveniences.

On the other hand, some states pursue this state interest within reason as they observe moral and ethical standards required by any universal respect for human rights. Morally, these states see sovereignty as responsibility not the protection of the few kleptocrats, who have built what German Sociologist, Robert Michel, termed "The Iron Law of Oligarchy." The state interest then becomes the benefit of the few elites who regard the state and its survival as revolving around them. The state becomes them and they become the state. In South Sudan, there is no distinction between SPLM (the ruling party) and the state, and SPLM and SPLA (the national army) This kind of muddled thinking makes one singer, Garang Ateny, an SPLM apologist, say in his song: "We are all SPLM."

The former kinds of nation would oppress their citizens in the name of sovereignty. Anyone who holds, or tries to hold them accountable, is easily branded traitorous.  Undoubtedly, this monstrous and escapist use of sovereignty is meant to keep other states at bay. It's also meant to protect the political and economic oligarchs and kleptocrats. They continue to benefit as the masses suffer. In South Sudan, this is easily demonstrable.

While states have this interest and the right to protect their territorial integrity, they have no right to oppress their citizens in the name of sovereignty. Sovereign isn't the administration and leaders but the state as a whole, and more importantly, the citizenry. So when states fail to protect their citizens, then they give other state and non-state actors an excuse or an obligation to intervene in the internal affairs of the state.

In South Sudan, given the effect of more than five decades of war, different foreign actors, mostly westerners, have voiced concerns about human rights violations. These people, who supported the South during its war against Khartoum, are now voicing their concerns as Juba has now turned into what it was fighting against for more than five decades. Some of the most prominent groups are the US government, a collection of individuals who call themselves 'Friends of South Sudan', and the Enough Project. The Friends of South Sudan include Roger Winter, Ted Dagne, Eric Reeves, Brian D'Silva, and John Prendergast.

Having enjoyed good relations with the US from the mid-1990s until a few years before and after independence, Juba entered Washington's black book because of SPLA atrocities against civilians, corruption, and Juba's relations and support of SPLM-North during the Obama's administration.

In July of 2013, before President Kiir dissolved his entire cabinet and fired his then Vice President, Riek Machar, The Friends of South Sudan warned: "As friends, it is our responsibility to express our serious concerns directly and to offer constructive suggestions for the way forward."

Having supported SPLA/SPLM for decades given the atrocities committed by Khartoum against the African population in the South, these Friends were horrified by the atrocities being committed by the very people they helped in championing their cause. The group lamented that "[T]hese atrocities are not isolated incidents but among many deliberate measures taken by soldiers on the instruction of senior commanders and government officials. Some may argue that the failure here lies in the chain of command, but the evidence makes clear that these orders are indeed coming from senior commanders."

As this group started to remind Juba about their historical mandate to the people of South Sudan, the Enough Project with John Prendergast, George Clooney and Don Cheadle, took their criticism to a higher level by gathering data of the atrocities committed, the embezzlement of public funds and the use of the military money by SPLA commanders to enrich themselves as civilians and the infantry soldiers languish in poverty. Instead of appreciating the advice in order to chart a positive course for the people of South Sudan, the leadership of the SPLM doubled down by treating any criticism as a "regime change" agenda rather than as a corrective reminder. This fallout by South Sudan and her erstwhile supporters and advocates of the Southern cause, intensified after the crisis started in December of 2013.

While one can't rule out self-interest with the 'Friends' now turned staunch critics, South Sudanese need to pay attention to what these critics say instead of regurgitating Juba's narrative of 'regime change.' How and why did 'Friends' become critics? Did they just change all of a sudden because they love to criticize? Is Juba being criticized unfairly without any trace of the crime being labelled against it?

As South Sudanese, we need to acknowledge what is killing our people. After centuries of dehumanizing and decades of sociopolitical and socioeconomic subjugation, it is disheartening to scapegoat what our leaders are doing. The Enough Project and the US government wouldn't have anything to say against us if we had put our house in order. We give these people what they can use to criticize us yet we wonder why they criticize us. We can profess that no one loves our country more than we do; however, our actions have to align with this verbal patriotism.

According to the CIA, "South Sudan has little infrastructure – about 10,000 kilometers of roads, but just 2% of them paved. Electricity is produced mostly by costly diesel generators, and indoor plumbing and potable water are scarce, so less than 2% of the population has access to electricity. About 90% of consumed goods, capital, and services are imported from neighboring countries – mainly Uganda, Kenya and Sudan. Chinese investment plays a growing role in the infrastructure and energy sectors."

These are not made-up realities nor are they part of regime change agenda. They are the crude facts South Sudanese face on daily basis. Instead of tacking these unfortunate realities, the leadership focuses on blaming those who remind the South Sudanese leadership of its organic responsibility to the people of South Sudan.

When the Enough Project released their report in 2016 accusing President Kiir and other senior party leaders of condoning corruption, Tor Deng Mawien, one of the numerous and redundant presidential advisors, lashed out at the report: "That is a complete nonsense. Don’t ask me again, it is rubbish."

However, the fact that President Kiir sent out a letter to 75 officials in  May 2012 asking them to bring back the money they stole without any sort of accountability is a clear proof that the president condoned corruption. You arrest corrupt officials to send a message. You don't tell them to only bring back the money and let them go scotfree. The president himself admitted to Hilde Johnson as she recounted in her book, South Sudan: The Untold Story from Independence to War, that he'd tolerated the corruption of the ministers up to independence and that it was time "it stopped."

What affects South Sudan and the South Sudanese people are the decisions being made by our leaders, not by foreign leaders and personalities. Foreign nations and non-state actors like The Enough Project only respond to the consequences of our leaders' decisions.

If the recent declaration by our leaders holds (which is already reported to have been violated), then organizations like Enough Project or the US's government will not have much to stay against South Sudan. We need to develop a culture of holding the South Sudanese leaders accountable because these are the very people who make decisions that affect our people. The millions that are displaced or in the neighbouring countries as refugees were sent there by SPLM decisions and indecisions not by Enough Project decisions.

Those of us who chorus and rehearse Juba's 'regime change' scare tactic should be critical of their perception of the state realities. We give foreign elements a room to speak yet blame them after responding to our blunders. Blaming people who remind us of our duty is to show the world that we don't know what our duty is.

If we let our people suffer or die, no matter how we profess to love them, their suffering or death becomes a proof of our abject failure.

Kuir ë Garang is a South Sudan Canadian author and poet. He's the editor of 'The Philosophical Refugee' website.