June 26, 2018
"A child born the year South Sudan achieved independence will be 7 this year," wrote US ambassador to the United Nations in an opinion piece for Washington Post. As someone who grew up with the horrors of war, it's very sad that South Sudanese children still go through the same tragedies. A child who was born when the war started in 2013 will be going to Kindergarten this year. Sadly, all they will know is war unless Riek Machar and Kiir Mayardit develop moral hearts.

South Sudanese children are being born into what we were born into. However, the two protagonists of the civil war in South Sudan are toying with the lives of South Sudanese and the fate of the country.


"A child born the year South Sudan achieved independence will be 7 this year." Nikki Haley

That President Kiir and his former deputy, Riek Machar first met in Addis Ababa on Wednesday after two years and then a few days later on Monday in Khartoum, is more than bizarre. What makes these meetings bizarre is the fact that these meetings are meant to prepare the two men to commit to peace. Why these two men should be convinced by foreign leaders to do something absolutely crucial for South Sudanese is incomprehensible and disheartening. 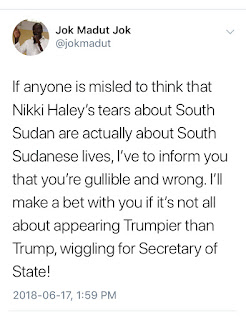 But given the political and power game Riek Machar and Kiir Mayardit are playing, it's difficult not to question our sense of responsibility to South Sudanese civilians and South Sudan as a country. We tend to focus on what others are saying than what Riek Machar, Kiir Mayardit, and their SPLM have done. If South Sudanese ended their war, people like ambassador Haley wouldn't have much to say.

It's very difficult to understand what President Kiir Mayardit and Dr. Riek Machar want, really. Many of you would say, 'duh', it's power! What else could it be?' While power is like the Marxian opioid, one would still expect reasonable concessions for the sake of the suffering South Sudanese.

However, the way Riek Machar and President Kiir have been acting lately makes one really question not only the moral consciousness of these two men but also their perception of reality in Africa and in South Sudan. One can understand the complexities involved in brokering peace; however, it's hard to understand why the two men need to go to two different capital cities within a few days to commit to peace in South Sudan? This is bizarre. A waste of time! A waste of resources!

But still, all we've got are promises. "We came to Khartoum to look for peace," said Riek. And Kiir said that "I came to this meeting with an open mind and hope my brother Riek did the same."

That they don't care about South Sudanese and South Sudan is clear. Neither Riek Machar nor Kiir Mayardit has ever called a press conference to formally apologize to the people of South Sudan and to make sure people are held accountable for the atrocities committed. But no, President Kiir and Dr. Riek Machar believe that verbally saying things amount to being a good leader and a conscious patriot. Until these leaders end the war, people like Haley will continue to take the moral high ground and for good reason: South Sudanese leaders are letting down their children and South Sudan.

Any rational man who cares about his country and his people would value the importance of political compromises. That the two leaders cannot sit down without a mediator is indicative of the nature of their moral outlook and the extent to which power has blinded them.

South Sudan will continue to bleed, to cry, to remain in destitution as it has been for the past 100 years.

As long as President Kiir and Riek Machar need a third party to convince them to do what is valuable to South Sudanese and South Sudan is a worry fact about the kind of leaders we have.

Power is an intoxicant. It gives people a 'high' that is not easy to avoid. That is understandable. However, President Kiir and Riek Machar should acknowledge more than half a century of the suffering of South Sudanese under the elite ruling class in Khartoum and centuries of dehumanization by slave traders.

As Riek Machar and President Kiir continue to pay lip service to the South Sudanese and the world, they are digging the graves of South Sudanese and then dancing callously on them. President Kiir needs to dissociate himself from warmongers in Juba if he is indeed not the obstacle to peace. Riek on the hand needs to see what political concessions he should make because, in politics, concessions are as permanent as change.