Color Identity and Self-Identification: The Case of Raven-Symone


Raven-Symone Pearman has angered many African-Americans regarding her identity utterances. Even her father wrote a letter in support of his daughter while acknowledging that she can say some dumb statements sometimes. However, looking at some of the responses to Raven-Symone, I realized that some  comments revealed some ignorance regarding the identity of Africans and people of African descent in Europe and in the Americas. Below are two of her quotes.

I never said I wasn’t Black. I said I wasn’t African American. To me, that’s a difference. Thank you to Ancestry.com, actually, for sending me my DNA test. I am from every continent in Africa, except for one. And I am from every continent in Europe, except for one. And for the last 400 years, my family has been living in Virginia. How long do you have to be in one country before you’re that?”   - Raven-symone


There has always been, and continue to be, a huge identity crisis that’s never been solved or fixed into a given humane paradigm. Paul Gilroy’s 1993 book,  The Black Atlantic, confused the identity crisis issue even more. Gilroy detaches the descendants of African slaves from Africa and argues for a ‘hybrid’ form of identity that makes use of cultural elements from Africa and the 'west.' Despite his call for his hybridized view of identity, Gilroy however, played down any rootedness or a strong sense of Africanness.
People of African descent in the US, especially descendants of African slaves, have never had a fixed, univocal identity. Even worse, their identity has always been something decided for them by others, especially European-American scholars. Even renowned ‘Black’ scholars like Louis Gates, Cornell West, James Baldwin, Frantz Fanon, W. E. B Du Bois, Paul Gilroy, among others, struggled and continue to struggle with the issue of identity. To single out Raven-Symone without critically looking at the general context that informs her ‘ignorant’ utterances is actually ignorant in itself.

The descendants of African slaves in the Americas were not only commoditized but also dehumanized and anything that gave them a sense of humanity taken away. Slave traders and slave masters knew the importance of culture, religion and organic identity so they made sure anything that connected slaves to Africa was removed. Sociologists call that ‘cultural or social death.’  All people of African descent in the Americas  were killed socially and some of them are now trying to rise from that death.


This social death continues to dog these people to the present. Touré in his book , Who's Afriad of Post-Blackness and Gates in Thirteen Ways of Looking at a Blackman, exemplify this identity crisis. Some of the people they interviewed in their books had this sense of confused identity regarding who they are. Gates, interviewed by Touré, argued that there are as many ways of being black as there are African-Americans. In other words, there are 30 million ways of being black. Some people interviewed by Gates saw being called ‘Black’ as limiting them. I am a human being who happen to be black, some would say.
This underscores one thing. Raven-Symone isn't alone! While some people would see their response as a rejection of self, we have to remember that what they are rejecting isn’t themselves but a sense of identity, rooted in superficiality of color: Black. They are rejecting what Europeans and EuropeansAmericans said they are and should be. You can’t have intellectual and social power if who you are is someone else’s fancy. Black, Nigger, Negro, Colored weren’t term meant to praise the African Personhood. They were all meant to devalue and denigrate her. She had to accept them because she had no power to self-determine, to be self-determinant as sociologists say. 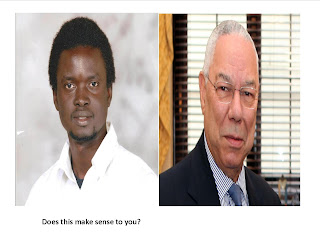 When, I, who has a very dark skin pigmentation is classified in the same color identity as Colin Powell (Who looks more European), then you know something is wrong. Colin Powell is closer to George Clooney color-wise than to me, however, Colin and I are described and classified as ‘Black men.” And Colin, lacking the capacity both personally and racially to define himself, simply accept that he is a ‘Black man.”

Sudanese president, Omar el Beshir, who’s darker than Colin Powell, is called an 'Arab' and Powell is 'Black'. What connects me with Colin isn’t ‘Blackness’ but Africa. The only commonality I have with Colin is  Africanness not blackness. It is really Stupid or Childish to think that Colin is ‘Black.’ He’s 'black' only because of his inability to define himself and by what Europeans and Europe-Americans want him to be. He has some Africanness in him and that piece of Africanness makes him unsuitable in the greatness of Europeanness, supposedly. And we still think the 18th/19th 'Racial Purity' is gone!
So if people like Raven-Symone try to define themselves, what we need to do is ask them to put their dissent into context in order not to be misunderstood. Ms. Pearman isn’t rejecting herself nor does she think it’s bad to be someone of African descent. What she’s rejecting is a condition she’s been placed in: Being called 'African-American.'  She’s rejecting what she feels is an imposed identity; something educated African-Americans have not been able to do sufficiently.

Gates, in his interview with Touré and in ‘Thirteen Ways of Looking at a Black Man’ sounds really defeated an incapable of defining anything about identity as a scholar. He just fits himself into the  presented Eurocentric status quo availed by his European-American scholars.

However, to reduce the richness of people's culture, tradition and values to a mere color is not only to devalue their humanity, but to also see them as of less significance. This is a problem that has always dogged African-Americans. Jesse Jackon's first public use of the term African-American is an example of an identity that originates from the people and also presents them not as mere color  but as people with cultural origin. Raven-Symone needs to remember this.

What Raven-Symone wanted to do is to detach herself from anything 'African.' She believes she's been in America long enough to be an 'American.' What she needs to remember is 'what kind of African?"  Italian-American, British-American, German-America...? Even people like Ms. Golberg of 'The View' once said she doesn't want to be hypernated.  But who's not hypernated in America?

Identity crisis is not Raven-Symone's fault. it's America's fault! Ms. Golberg and Ms. Pearman need to remember that they are 'black' because of their connection with 'Africa.'