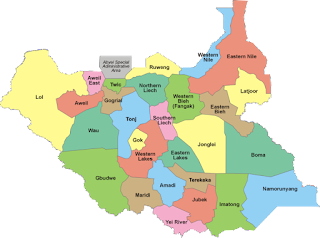 Slicing up South Sudan into more administrative boundaries [states] is to avoid solving the problem. obviously, additional states are not a solution to governance problems and service provision in South Sudan. Additional states don't increase human power and resources nor do they solve the security problems. From the look of things, things will continue in the same trajectory as this euphoric but false sense of satisfaction from the creation of more states gives people a false sense of hope and security.


The leadership in South Sudan has developed a knack for postponing problems rather than solving them. The internal problems within SPLM resulted from the failure of leaders to tackle things head on. SPLM meetings were postponed in the hope that the problem will magically disappear. The August 2015 peace agreement, the Agreement for the Resolution of the Conflict in South Sudan (ARCISS), was a postponement of the politico-military problems.

Now, the waves of decreemania that's resulting in the creation of more states in South Sudan is a postponement of conflicts and problems in South Sudan. It gives people false feelings that the leadership is solving their problems.

Not only does the creation of more states compartmentalize some tribes and further exacerbate  tribal divisiveness, it also creates more administrative units with no governance and administrative infrastructure needed for service provision. And since these states are created without prior fact-finding missions to first assess and deal comprehensively with communal border issues, the states have added to fatal divisiveness.

A false sense of hope is more dangerous than hopelessness. This is the case in South Sudan. A populace that comes to  the realization that their government wouldn't do anything for them would resort to self-sufficient methods, however difficult. However, a population that's given a false sense of hope that government decrees will solve their problems will remain in destitution and helpless for a long time.

When will South Sudanese leaders realize that creation of more states is a problem postponed? Essentially, some South Sudanese governors operate remotely; far away from the people they are supposedly governing. As one government critic said, this is to bring problems rather than towns to people. Some administrative headquarters are mere mud huts villages.

The federal government also has no strategic and national method of dealing with inter and intra-tribal problems, most of which fatal. However, the South Sudanese government continues to further divide the country administratively as if the current division isn't enough. South Sudan's tribes need to be brought together not divided administratively. We would have thousands of countries in the world if people were given what they want in terms of self-governance.

Making people temporarily 'happy' isn't the same thing as building a healthy future for them.

The 'No Man's Land' that was created by the British officials between the Jieeng and Nuer in Upper Nile, which separated Nyarweng and Hol Dinkas from Lou Nuer and Garweer exacerbated the problem rather than solve it. While Europeans nations were trying to bridge their differences and avoid wars through treaties, British officials denied South Sudanese tribes that chance. They rather separate them than help them see ways of mutual interest.

South Sudan has enough problems as it is so it's needless to create more problems while solutions to them are postponed.