It’s Time for A Nonviolent Revolution in South Sudan 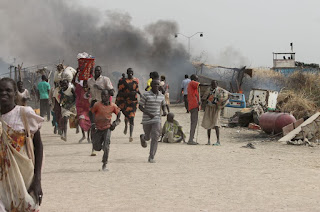 South Sudan has arrived at a point where SOMETHING HAS TO HAPPEN. But what that something shouldn’t be, is VIOLENT. Changing governments through violence has never bred any peaceful, inclusive and democratic governance. Violent removal of leaders leaves behind bottled-up bitterness, which usually results in another violent removal. But we all agree that the government in Juba is not only a failure, but also a destructive, myopic force for any peaceful coexistence of South Sudanese.
While I believe South Sudanese leaders have committed unspeakable and horrendous atrocities, I don’t necessarily see them as bad people. They are just horrible quasi-politicians, who failed to transition from a militarized tradition to a purely, democratized political system. Additionally, I don’t see them necessarily, contrary to how Alex de Waal’s perceives them, as people who maliciously went out of their way to consciously design a destructive system. Disorganized and jittery of Khartoum’s attitude toward the South, and lacking creative leadership capacities, South Sudanese leaders got lost in the complexities of state-building.

SPLM leaders had no ideological base and creative internal avenues to solve their problems. Lack of leadership, tribalized politics and the general desire to be powerful and wealthy, destroyed South Sudanese leaders. Instead of focusing on solving their internal political problems, they resorted to building their tribo-military bases to defend themselves against their imagined and real politico-military enemies. This helped create a system in which what politicians and military leaders did was to compete in a survivalist system. It was about survival. And in a survivalist system, what you need are people you can trust and people who support you no matter what. Sadly, in South Sudan, these people turn out to be one’s fellow tribesmen.


Since these leaders have tribalized the military and politics in a survivalist system, it’ll be almost impossible for them to be the ones to make South Sudan a peaceful environment. They have to be forced out as they’ll not leave on their own accord. Nonviolent defiance is the only way to force these leaders to change.

In 2008, it had to take the intervention of elder statesmen like Joseph Lagu and Abel Alier to avert the crisis. In march of 2013, these leaders failed to compromise their differences so they postponed the problem. In December of 2013, instead of resolving their differences, they resorted to public ridiculing of themselves. There was no reason why these leaders couldn’t reconcile their differences. Problem-solving is what leadership is about.  What John Garang did in Rumbek in 2004 could have been a superb example. Sometimes the leader has to eat a humble pie to avert a crisis.


December 15 crisis was a result of lack of internal mechanism within SPLM to solve problems. This is the problem that continues to break South Sudan apart, and will continue to do so.
But once given a golden opportunity through the Agreement for the Resolution of Conflict in South Sudan (ARCISS) in 2015, they shamefully squandered the only chance for a peaceful resolution of the conflict in July of 2016. Greed, incompetence and lack of strategic vision continues to plague South Sudanese leadership.


In the light of this, it’s time for South Sudanese from all works of life and from all tribes in all towns and villages in South Sudan to should ‘ENOUGH IS ENOUGH.’ The war has to end! But the war will NEVER end as long as SPLM is in charge. The current leaders need to be forced out. However, they can’t be forced out violently. They need to be forced out peacefully.
Students, women, youth, wounded veterans, civil servants, shopkeepers, religious leaders, police, prison wardens, need to occupy government offices and Dr. John Garang's mausoleum until Juba accept to bring peace. Villages and towns should refuse to fight for any rebel groups. SPLM forces should refuse to fight for leaders who don’t care about anyone; those who have brought the country to its knees. It’s time for the war to stop; but it’ll not stop as long as we continue to support these leaders. We praise these leaders when they brought the very conditions that  are now killing civilians.


In 12 years, all that SPLM and SPLA have brought South Sudanese is misery. SPLM is too deformed to be reformed, to use John Garang’s words.
It’s time for Juba to be led by fresh and younger eyes. SPLA and SPLM have done their jobs. It’s time for the names of the mighty two to be archived as someone once suggested. President Kiir and senior military leaders need to be replaced by younger, nontribal military leaders. You can tell me “good luck with that!” but that’s the necessary reality: they have to go!


There’s nothing left for SPLM leaders to bring to South Sudanese accept destruction, misery and destitution. The people of South Sudan are more powerful than a few politicians. Take your country back! It’s time for a South Sudanese revolution!