Both IGAD and South Sudanese leaders are complete failures 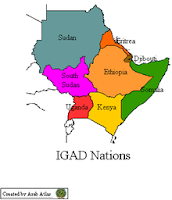 No government can pretend to care about the state or the people when it has no set strategic policies it can faithfully execute. While the government of South Sudan had a number of strategic plans and a guiding constitution, the officials either didn’t know what do with them for lack of knowledge as to the meaning of what they contained; or the officials simply ignored them for the obstacles they presented in their process of looting the country.

The agreement for the resolution of the conflict in South Sudan (ARCISS), which was brokered by IGAD and the funding partners, has failed.  In addition, the attempt by South Africa’s African National Congress (ANC) and Tanzania’s Chama Cha Mapinduzi (CCM), to reunite the crisis-engendering SPLM, signed in January of 2015, has also failed. Now, Uganda’s president, Yoweri K. Museveni, instead of helping rekindle or restart the flames of ARCISS, of which he’s one of the witnesses, decided to chart his own course in relation to SPLM reunification.

In a way, South Sudan and her peoples have become a geopolitical object of interest play. Museveni, who himself cannot stand opposition, and who presumably wants to die as president, thinks he can bring something he cannot bring to Uganda: genuine freedom and equality of all citizens.

While the above failures to help salvage what is left of South Sudan aren’t a surprise to people who understand Sudan’s and South Sudan’s political dilemmas, it’s surprising that the world leaders haven’t yet decided to help broker a different peace initiative given the fact that both IGAD and the South Sudanese leadership are part and parcel of the suffering of the South Sudanese people. With their own geopolitical, politico-economic interest in South Sudan alongside their own inability to free their own people, the IGAD leaders will never bring peace and stability to South Sudan as long as there’s no strong, development-conscious, and disciplined leadership in Juba to put things into perspective.

It’s a big joke to think that IGAD leaders will bring peace to Juba. After more than 30 years in power, Museveni still thinks that he still has something to offer. Ethiopia’s Desalegn is killing or jailing bloggers and Journalists and intimidating the opposition. Sudan’s Beshir cannot even peacefully end the wars against his government in Khartoum. Kenya’s Uhuru is an irresponsible politician, who lacks serious political discipline and decency; and he’s also fond of inciting language along tribal lines. As I have said before, East African leadership cannot bring to South Sudan what they cannot bring to their own people.

Undoubtedly, IGAD leaders forced the ARCISS without any safeguards against its collapse. They also saw Riek Machar forced out of Juba without them intervening when they knew very well that his departure from Juba always pronounces violence to South Sudan. They also know that President Kiir is crippled leadership-wise yet they can’t even convince him with a departure package in order to leave power peacefully.

And it’s even a bigger joke to think that the same tribo-political ideals and leaders, who brought the crisis, will at the same time bring about the resolution to the crisis when they’ve shown unequivocally that they cannot simply reconcile their differences leave alone ending the war. We’ve seen time and again that Juba needs a serious change of leadership. What’s missing in South Sudan isn’t what’s to be done but who’s to do what ‘s to be done.

Yet, the current national dialogue (ND), which is co-chaired by Angelo Beda and Abel Alier, both of whom being veteran politicians in Khartoum, is nothing but a face-saving for Juba. National dialogues are usually after-peace initiatives meant for mending relations and healing wounds, creating or ensuring national cohesion. The war has to be comprehensively ended before a national dialogue is initiated. Ending the war include restricting of the government, something ND leaders cannot do. Unless the war is comprehensively ended with the change of leadership in Juba, any ND initiative is even a gargantuan joke.

South Sudanese die on the roads, in foreign countries and from hunger and diseases, and Juba, which is supposed to be their voice, is usually silent. There’s never even a single condolence message or an address by the president to the nation. What exactly is President Kiir for if not the people?

For South Sudan to be peaceful, there has to be a change in peace brokerage, the leadership in Juba, and the complete end to the war through a comprehensive and inclusive peace initiative.  This should, unequivocally, include all armed groups with no exception. The needs and grievances of all the armed groups need to be presented and layout before a comprehensive peace process is initiated.

We can’t dialogue before ending the war; We have to end the war then dialogue. While African leaders sing ‘African solutions for African problems’, it’s high time we face the truth and realize that African solutions are nightmares and death to the African people.

The world needs to listen to South Sudanese; IGAD has failed.