An Open Letter to President Kiir Mayardit and Dr. Riek Machar ... and the Rest of Power seekers in South Sudan 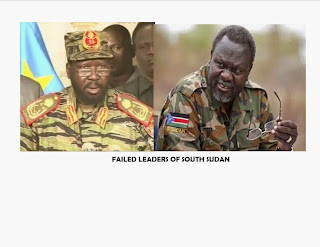 It has now become very clear to me (and to other South Sudanese I'd assume) beyond any reasonable doubt that power is more important to you than South Sudan as a state and her civil population. While your "care" when it comes to South Sudan and civilians is something you profess verbally, your actions have contradicted about everything you say as "care of civilians." Undoubtedly, this is something we can empirically demonstrate. The United Nations, Human Rights Watch and Amnesty International and the African Union can support me here in bearing witness to your anti-civilian, treasonous action toward South Sudan.

Fortunately, there is no room here for "this is western propaganda" ruse that is always peddled by Africans totalitarian leaders to dupe innocent civilians into supporting what affects them [civilians]

As Human Rights Watch (HRW) has put it,


"All parties to the conflict committed serious abuses, including indiscriminate attacks against civilians including aid workers, unlawful killings, beatings, arbitrary detentions, torture, sexual violence, recruitment and use of child soldiers, looting and destruction of civilian property. Some of the abuses constitute war crimes or crimes against humanity. All parties to the conflict restricted access for the United Nations (UN) mission,those providing humanitarian assistance, and ceasefire monitors."

The African Union, in their report on October 15, 2014, support this report of your callous lack of interest in the lives of civilians:

"The Commission notes that South Sudan has witnessed gross violations of human rights for over 50 years, particularly during the 22 years of civil war. Whilst the crimes committed during the on-going violence are thus not new, the rate at which people have been killed during this conflict could be higher, according to some estimates,270 than during the civil war. Reports received by the Commission from the exiled communities in Kenya, Uganda and Ethiopia as well as opposition leaders allege that between 15,000 and 20,000 ethnic Nuers were killed in the first three days (Dec 15 to 18). While proof of actual numbers was not provided, there seems to be a remarkable consistency in stories told by the communities of the brutality and violence on both sides. Regardless of whether those persons who carried out the attacks considered them to be retaliatory, the violence on both sides was no less acrimonious or brutal." (emphasis added)


Well, well, I know your supporters, blind as they are to your power schemes, will be up in vitriolic polemics in an attempt to justify how each one of you is different and good. While it takes two to tango, it takes the audience to judge the nature of the tango - horrible or enjoyable! In South Sudan, it has gone beyond your horrible war tango to a messy free dance of uncultured dances. South Sudanese are the unfortunate witnesses to these horrible mess.

But the obvious nonsense from your supporters are statements like, "Dr. Riek Machar is the savior, a revolutionary. He is fighting for freedom and democracy in South Sudan." Essentially, these supporters are either appeased job beneficiaries or tribal kinsfolks whose political support is a cultural default. For, you, President Kiir Mayardit, your staunch supporters, most of whom being mindless tribalists, will say, "No, President Kiir is a humble, good man, who is fighting power-hungry people like Dr. Riek Machar, members of G-X (aka FD - former political detainees), Thomas Cirillo, Malong Awan, among other callous power-seekers."

Your professed "care of civilians" is a euphemism for "power at all cost."

While many readers will say that there is nothing new in what I am saying and that we all know that the two of you are beyond redemption, it has to be reiterated that you have held (and continue to hold) South Sudan hostage. As long as your presence in this crisis continues to cause suffering, the issue of your callousness needs to be reiterated over and over and over ....

There are times when a leader, who cares about his/her people, becomes self-critical (conscientious) and makes a decision that puts the lives of the people first. Gordon Muortat Mayen made such a decision in 1970 when Joseph Lagu decided to take over the overall leadership of both the Anya-Nya National Arm Forces (ANAF) and the political wing (The Nile Provisional Government). Muortat, in instead of fighting Lagu over the issue of power, advised his supporters to support Lagu. (Note: Lagu would later change the name of the political wing to Southern Sudan Liberation Movement - SSLM).

Dr. John Garang, to a very limited extent, exemplified a Mourtat-Moment when he graciously took in all the criticisms (including many from Kiir, Wani and Taban) unleashed on him in Rumbek in 2004 without subjecting anyone to punitive actions. He owned up to the problem within the movement as he realized that the CPA was more important than his personal ego!

Besides the horrendous suffering you have caused, there are a number of issues that make the argument that you don't care about the civilians unquestionably factual.

First, there has never been a time when you've convened a press conference to officially apologize to the South Sudanese people. It seems both of you are too big to own up to what you have caused. When South Sudanese die - whether through man-made or natural disasters - none of you talk to the media to address the affected families and communities. There is nothing moral ethical and reassuring than a leader who acknowledges the suffering of his or her own people. Calling out the names of the deceased and comforting affect families, humanizes the victims and prevents them from becoming mere numbers on paper. You only respond when "important" people die not when civilians are displaced by fire or flood.  What exactly makes you leaders of the people as you claim?

If there is any iota of humanity left in you, then

1) Put your egos aside and implement the agreement in a manner that shows that your hearts have not turned into stones
2) Make an attempt to differentiate between a political and a personal disagreement
3) Understand that your legacy is not what you think but what the nation decides; and no matter how  long it takes, the nation will judge and prosecute you, unless you do something formidably life-saving in South Sudan
4) The more you prolong the war, the more tribal hatred is going to entrench itself.

It is my hope that you learn a thing or two from the Muortat-Moment and make it a political culture in South Sudan.

Kuir ё Garang is the editor of THE PHILOSOPHICAL REFUGEE. You can follow him on Twitter @kuirthiy