"South Sudan has been a failed state since [its] birth. [The] Only solution will be a temporary period of voluntary UN trusteeship to allow for establishing [of] viable institutions and for training a new class of credible leaders.”  ~ Herman J. Cohen

On April 7, 2021, former assistant secretary of state for African affairs, Herman J. Cohen, wrote this on his twitter account: “South Sudan has been a failed state since [its] birth. [The] Only solution will be a temporary period of voluntary UN trusteeship to allow for establishing [of] viable institutions and for training a new class of credible leaders.”

But as always, South Sudanese responded with anger, contempt, and dismissiveness. Below are samples responses on twitter. 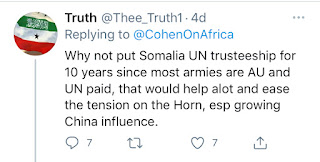 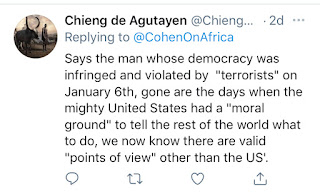 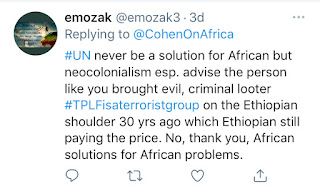 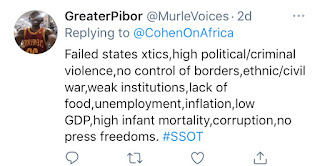 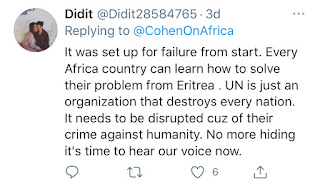 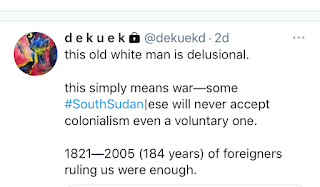 As some of you know, this is not the first time this suggestion has been floated. In 2014, Joint Administration was suggested by Lyman et al. and Trusteeship by Herman Cohen to the same response by South Sudanese.

While I would not suggest these administrative alternatives, there are several things we need to understand as South Sudanese. First, American policy makers feel partly responsible for the independence of South Sudan and its failure, so they have a connection they have with South Sudan that they do not have with Somalia, Congo (DRC) or the Central African Republic.

Since President George W. Bush signed the “Sudan Peace Act” on October 21, 2002 and declared what the Sudanese Government was doing to the people of South Sudan as a “genocide”, the American government and people have felt responsible, wrongly or rightly, for the well-being of the South Sudanese people. This sense of connectedness was farther strengthened by AmericanChristian evangelicals, who urged President Bush to act in the interest of what they perceived as their brothers in Christ being persecuted in Sudan because of their faith. This would continue through the comprehensive peace agreement (CPA) negotiation and interim period.

Secondly, these suggestions, wild as they seem to South Sudanese, do not target South Sudan because it is a successful country whose success is envied by the United States. They target South Sudan because its leaders have failed in state building and let down the citizens who have suffered for more than seventy years of religious and imperial oppression. As long as South Sudan continues in the same sordid and dictatorial trajectory, suggestions like trusteeship and joint administrations will keep cropping up.

But what I would like to say is that South Sudanese only respond angrily to these suggestions without advancing any viable alternatives which would turn around state building and bring peace, security, and comfort to civilians. Criticizing Cohen without advancing viable alternatives is to naively act in complicity to the destruction happening in South Sudan. Anyone criticizing should advance a clear alternative because South Sudan keeps on going the same destructive path.

Anyone who has read a book on colonialism knows that the above worrying list epitomizes colonialism par excellence! How much disrespectful is that to the sovereignty of South Sudanese and the lives lost during more than 70 years of liberation struggle?

Let us condemn wild suggestions but let us also be self-critical.

Kuir ë Garang is the editor of The Philosophical Refugee.