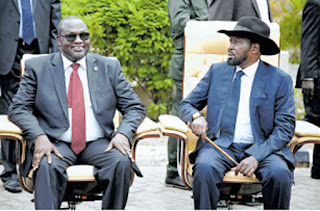 Since South Sudanese warring parties signed the agreement for the resolution of conflict in South Sudan (ARCISS) in the August of 2015 and then “revitalized” it in 2018 (R-ARCISS), nothing has worked in the way agreements are supposed to work. Instead of acting as the blueprint for peace and stability in the country, the agreement has turned out to be the problem itself.

How can a problem be a solution to another problem?

However, the main signatories to the agreement, the Sudan People’s Liberation Movement in Government (SPLM-IG) and the Sudan people’s Liberation Movement in Opposition (SPLM-IO), still believe the implementation of R-ARCISS is the magical solution to the South Sudanese political crisis. They know their attitudes toward themselves and the political impasse they have experienced since the agreement was first signed in 2015. But they wish these attitudes away.

Unfortunately, the parties still believe that this attitude will magically disappear, and the agreement will be implemented in “letter and spirit” as Dr. Riek Machar likes to say.

When Riek Machar decided to withdraw the participation of SPLM-IO from the security mechanisms meeting on March 24, 2022, President Kiir deployed security forces around Riek Machar’s place of residence. When Riek protested the deployment of the forces because he was not consulted about the supposed protection, President Kiir justified his action as his attempt to protect Riek Machar.

This begs the question: Protecting from who? Are there rogue forces under President Kiir he cannot control? This dynamic raises more troubling questions than answers.

But this, undoubtedly, shows the extent to which President Kiir and Dr. Riek Machar do not trust one another. Kiir expects Riek to flee Juba at the slightest provocation and Riek knows Kiir’s recalcitrance.

Obviously, President Kiir was conscious of what happened in December of 2013 when some senior SPLM members refused to attend the second day of the National Liberation Council on December 15, the night on which the crisis began. Riek fled Juba that night.

Riek also fled Juba in July of 2016 when the implementation of the August 2015 agreement reached a deadlock, eventually leading to a bloody armed confrontation.

What one may conclude from the nature of the relationship between Vice President Riek Machar and President Salva Kiir is their inability to find a solution without external support.

It is now clear that R-ARCISS is no longer the path to peace and stability in South Sudan. It’s an obstacle.

Accordingly, Kiir and Riek need to think beyond R-ARCISS and find a home-grown solution to the problem.

The implementation of agreements is difficult, so I have no illusion for any simplistic solutions. Nonetheless, thinking in a formulaic way in a country with a complex history, politics and ethnic relations is a dangerous state of mind. But the complexity in implementing R-ARCISS is not an inherent complexity; it is its elite-centredness and the egoistic nature of agreement leaders that has created this costly impasse.

Being a leader requires being creative for the sake of the country and her peoples. What is happening in South Sudan now between SPLM-IO and SPLM-IG is this obsession with the elite-centered R-ARCISS as the only way to peace and stability.

This vacuous idea that all clauses of the agreement must be implemented before peace partners embark on national development is the reason why South Sudanese will continue to suffer as R-ARCISS stands in the way of peace and stability.

It's scary that President Kiir and Vice President Riek Machar are not able to think beyond R-ARCISS. How long will regional leaders and international partners be consulted to help solve issues of leadership and governance in South Sudan?

It’s time for President Kiir and Vice President Riek Machar to realize that they can forget their egos in the interest of South Sudanese. As long as external mediators are needed to reconcile South Sudanese and move the agreement implementation forward, South Sudan will continue to remain unstable.

It's nearly seven years since the agreement was first signed. That’s three years short of a decade. Politically, that should tell South Sudanese everything they need to know about Kiir’s and Riek’s intention regarding civilians and the country. A formal agreement will never bring peace and stability to South Sudan.

It’s time to prioritize what civilians want. It’s time for Dr. Riek and President Kiir to realize that two decades have been wasted through a petty yet a costly rivalry.

It’s time to move past R-ARCISS and think as South Sudanese who must solve their internal problems as brothers and sisters. If Riek and Kiir cannot work together, or they are unable to find solutions beyond R-ARCISS, then it’s time for them to acknowledge that they are liberation and historical leaders, and that time is now ripe for development leaders.

*Kuir ë Garang is the editor of The Philosophical Refugee.'