I will be presenting in June on tolerance and inclusion based on my novel, Angelina & Adut. Being from South Sudan, a country where tribe transcends identity and political realities, and now living in a multicultural Canada, I find that lack of understanding of one another by diverse communities that make up South Sudan and Canada is a social problem. Indeed, it is not only an obstacle to the inclusion of minority communities; it is also an obstacle to the dominant majority group's understanding of themselves. There are many cases of racists attacks and verbal insults that result from perpetrators assuming that what they know about their targets is true.

While it is possible for us to racially discriminate or judge people we know, the chances of judging people we know diminish significantly the more we know them. An easy example of the importance of understanding others is the attitude people develop when they want to harm others or when they want to deny them something valuable. Essentially, before you fight someone, you insult them. Insults are attempts at diminishing the value of people, an attempt at estranging them, as Toni Morrison argued in The Origin of Others. It is easy to discriminate against strangers or make others strangers or dehumanized in order to discriminate against them.

We don't usually praise people we want to harm. No one praises someone and then slaps them. Just imagine praising someone you are made at. Or better, just think, NOW, of someone you consider your "enemy" and think someone positive, something really good, about them. You'll find yourself confused.

Denigration of people is part of "estranging" them, of dehumanizing them, to justify our treatment of them. The Nazis called Jews "parasites" to create a consciousness among the Germans that Jews are unwanted people. In Rwanda, Hutu's used "cockroaches" to estrange Tutsis and moderate Hutus in order to create a consciousness among Hutus that their targets had to die.

In Angelina & Adut, I used the story of two ten-year-olds, Adut (a South Sudan) and Angelina ( a European Canadian), to illustrate the problems, hopes, and the importance of "knowing others." We hardly discriminate against our friends or colleagues from other "races." So the story of Angelina, Adut, their families and friends, is how tolerance works in the family and society and the challenges faced by people who want to be inclusive.

As long as communities in Canada remain ignorant of each other's actual sociocultural realities, they risk getting seduced by superficial stories in the media and prejudiced, ideological scholarly writings. While it is easy to publicly proclaim that one is inclusive, it is another thing actually to live an inclusive life. Angelina and Adut presents a nuanced case that changes us.


“Mm. If the world was like you, we’d see it as a solid indivisible mass of smiley love; but does what you say reflect the man you are? It’s not about having a Chinese accountant, a black secretary, a Japanese employment consultant and a Mexican chauffeur, that I’m talking about. And it’s not certainly any man I’m talking about. It’s my husband. A divided self is a deceptive self, at times, a deceived self. I wouldn’t say a deceived self with emphasis. If you believe all the things you said project the way you live then how do they apply to me, a person who’s not you, but has to be treated not otherwise, but just a human?”

Jacqueline to Oliver (Angelina's parents) in Angelina and Adut, p.257

“You can apply this thought experiment in any way you like, but this is my humble part. Society knows what it wants from you anytime it does something. It suspects you of something and then tries to do something so that it goes away sure that you either have it or you don’t. If someone thinks you’re short-tempered and then annoys you, and you act in the manner that was in his head, whether he’s wrong or not, you remain short-tempered. Look at an African like me, who says he’s proud of his skin pigmentation. When you Savior, with lighter skin color than me, told me that I’m too black – too dark so to speak – and I slapped you, what would you think of me? Why’d I fight you if I know my skin is that beautiful?” 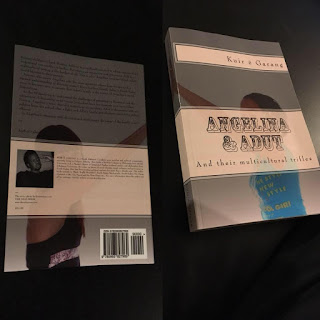 Kuir ë Garang is the editor of THE PHILOSOPHICAL REFUGEE
at April 28, 2019