Leadership, callousness and the inability to solve problems in South Sudan 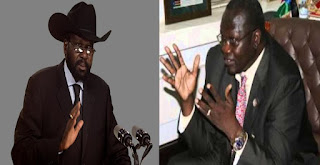 Now that President Kiir Mayardit and Dr. Riek Machar will be meeting in Addis Ababa on May 2 to breathe some hope into the stalled peace agreement, it is important to reiterate the major leadership problem in South Sudan: the inability to solve problems or devise solution-focused strategies.

Problems are expected to magically disappear or are exaggerated and blamed on someone else. Since the second Sudanese civil war ended in 2005 after the signing of the comprehensive peace agreement (CPA), the ruling Sudan People’s Liberation Movement (SPLM), has not been able to properly professionalize into a conventional, law-governed political party. Following the death of its founding leader, Dr. John Garang de Mabior, in a helicopter crash in Uganda in July of 2005, the SPLM has been a hotbed of internal dysfunctionality. The leadership soon realized that it is easy to run a militarized organization than a political one.

Since military leaders were used to giving orders and having them followed without any reasonable questioning regardless of the unreasonableness of the orders, they found democratic debate hard to stomach. Having a subordinate disagree or questioning the logic of the party chairman—the big man—became an impossible discomfort to live with. Those who fought in the war found no logic in being regarded wrong by those who didn’t join the liberation war. That freedom fighters liberate countries for everyone became a myth in South Sudan. “We fought for it, so we should enjoy it ourselves” became the politico-economic exclusionary mantra.

So, problems were identified but left unresolved and that fomented discontent within the rebel movement turned political party. The postponement of problems became the preferred political culture. Evasion became the only recourse. After their failure to solve the party leadership issues in 2008, and in March, May, and December of 2013, the postponed problems became a latent crisis, then a real disaster that plunged the country into a bloody civil war in 2013.

After several attempts to resolve the crisis with the help of Inter-Government Agency on Development (IGAD), a regional body, and the international partners, the peace negotiators realized that SPLM leaders were more focused on being right about their dreadful moral and political claims than the resolution of the conflict. Their commitment to the future of the new state and the people of South Sudan was reduced to egotistical verbal claims without practical self-sacrifice expected of former freedom fighters and moral leaders.

Luckily, after nearly six years of bloody and needless civil war, South Sudanese civilians and the international community are hopeful that the period of needed respite for the aggrieved populace in South Sudan is at hand. Brokered, ironically, by the former Sudanese president, Omer El-Beshir, the very man from whom South Sudan broke away in 2011, the so-called Khartoum Peace Agreement is expected to be honored by the warring parties. It is not yet clear what the ousting of President Beshir (now a prisoner) will have on the agreement.

South Sudan’s minister of information, Michael Makuei, told the press on February 13 that “The cabinet decided that all the employees in the public sector should monthly contribute a one-day pay from their salaries for the next four months in the interest of the peace.”

This is a controversial decision because civil servants’ salaries are not always paid on time. Besides, most of the senior government officials live in, hotels that are paid by the government. So this would be considered unfair to the civil servants whose salaries are not only meager but also hardly come on time. Even as the government decries lack of implementation funds, it is reported to have hired former American ambassador, Michael Ranneberger, to lobby against the establishment of a hybrid court.

The opposition spokesperson, Mabior Garang de Mabior, told the Voice of America radio that the “workers are not paid on time as the situation currently stands, with government workers going more than six months without salaries and many of our foreign missions facing eviction. It begs the question; what salaries does the regime intend to cut?”

Without implementation funds, it will nearly be impossible to implement the agreement, something the people of South Sudan direly need. With millions displaced internally and in the neighboring countries and many more facing starvation within the country, South Sudan cannot afford not to implement this agreement. Unless the troika countries [United Kingdom, Norway and the United States], who have financially been supporting the IGAD brokered agreement, pledge implementation funds, the people of South Sudan will continue to suffer.

Another sign that the agreement might falter is the decision to unite the ruling party. Since the crisis started in December 15, 2013, the ruling party, SPLM, has been split into different factions that have been trying to reunite.  Since all the factions of the SPLM signed an agreement in Arusha, Tanzania, on January 21, 2015, to reunite, the unity has not been forthcoming.

However, the decision to reunite the party without the participation of Dr. Riek Machar’s faction [SPLM in Opposition] has been described by Machar’s faction as an attempt to undermine the agreement. Since the warring parties are required to work together to avoid misunderstanding or a return to war, the decision to continue to act with the exclusion of other stakeholders is worrying. Yet, instead of sitting down and resolving the problem, the warring parties resort to public counteraccusations, a classic problem within the SPLM.

Undoubtedly, the problem with SPLM has always been a sense of self-righteousness by some senior officials. As long as they have convinced themselves that a given decision is good for them, they avoid looking any farther. The idea that their decision can cause potential problems is never considered. The idea that every other alternative needs to be considered and a possible effect on the people and the politics of the country considered before a final decision is made is never contemplated. SPLM has a knack for whimsical decision making.

The humanitarian condition of the people of South Sudan when the first civil war ended in 1972, is the very same thing we are seeing now in 2019. South Sudan is like a nation that has been frozen in time.

Instead of courting the international community through people-friendly deeds that can be rationalized as working for the interest of the people in order to get implementation money, the government is now engaged in a war with one of the rebel groups that refused to sign the Khartoum Peace Agreement.

What is tragic is the fact that South Sudanese leaders get blinded by what they want to the point that the suffering of the people become secondary, or a non-issue. Now, in Yei River State, even as we wait for the agreement to be fully implemented, civilians are being killed and other fleeing for safety as forces loyal to Thomas Cirillo of National Salvation Front (NAS) fight the government forces.

The United Nations and the Enough Project continue to report murders, rape and displacement of civilians. Yasmin Sook of United Nations Commission on South Sudan said in a statement that “There is a confirmed pattern of how combatants attack villages, plunder homes, take women as sex slaves and then set homes alight – often with people in them.” Brian Adeba of the Enough Project said that “The atrocities are egregious: Rape, plunder, and wanton killings that amount to genocide.”

The recent report by the United Nations that South Sudanese activists, Dong Lual and Aggrey Izbon, have been executed under the national security directives, is going to add to the fears about the government lack of seriousness in bringing peace to South Sudan.

*Kuir ë Garang is the editor of THE PHILOSOPHICAL REFUGEE.