"If the SPLA cannot deliver anything and we just shout ‘REVOLUTION! and the cattle of the people are not vaccinated; their children are not vaccinated; there is nothing to eat; there are no basic necessities of life; no clothes in the market; no needle, no razer blade…the barest minimum of things are not available…then the people will drive us into the sea. Even if there is no sea here, they will find a sea to drive us to." 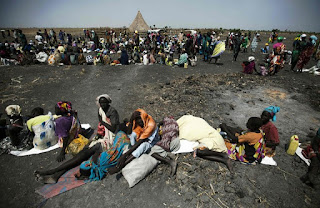 SPLM as a political party has failed in what it pledged to offer the people of South Sudan. This is not from me but from SPLM leaders themselves as they laid out their failures and leadership indifference on December 6th, 2013.  This was reiterated by SPLM’s former secretary General, Pagan Amum, on SBS Dinka Radio on November 19th, 2014. That SPLM has failed is something on which we can all agree. The logical consequence of that admission would then be the formulation of the way forward. Unfortunately, any hopeful formulation of the way forward looks more utopian than real.

But as most, if not all of us know, the events that transpired after December 6th press conference would change political realities from state-building to war conditions.

One of the main problems with the SPLM leadership is the inability to solve their problems. Yet, SPLM officials are good at pointing out what is wrong. And when they point out these problems, they always believe it is the SPLM members they oppose who are the problem. Problems are duly identified, meetings call, people disagree and then meetings end without any resolution. This vicious circle is then repeated, and problems accumulate.

While it is appreciable that they acknowledge internal problems and their effects on not only the SPLM but the country, they always fall short of coming up with strategies to solve these problems. And when they attempt to come up with strategies, they don’t implement them. This is the case with South Sudan Development Plan, 2011-2013, SPLM Strategic Framework for War-to-Peace, SPLM’s Peace through Development Agenda and many other post-independence studies and plans.

SPLM problems, which are by extension, South Sudan’s problems, are therefore a result of not having a plan or having a plan that is not implemented. But SPLM officials have never been oblivious to their internal problems and their own weaknesses.

As John Garang de Mabior said to graduating officers in 1990, ‘We have lots of challengers …and there is nobody else to do these things for us except ourselves. The laws which will govern this…the plans…there is nowhere else…these things are going to come from. They are not going to ooze out from my mind or anybody else. It is you, by grappling, by finding problems and trying to solve those problems and succeeding to solve those problems. Then you come out with procedures, with ways to do things. You come out with laws. You come out with regulations. There is no any other way we are going to get political structures, economic structures, administrative structures, except your own practical activities in the field, which then get translated into laws. Laws will not fall from the sky.”

And in his Independence Day speech, President Salva Kiir Mayardit had this to say:

“This Republic is at the tail end of economic development.  All the indices of human welfare put us at the bottom of all humanity.  All citizens of this nation must therefore fully dedicate their energies and resources to the construction of a vibrant economy.  The independence we celebrate today transfers the responsibility for our destiny to our hands.”

But two years after President Kiir’s speech, South Sudan descended into a bloody civil war. And even when several attempts have been made to bring peace to South Sudan, the attitude of the leaders toward one another had become more personal than political. Perhaps Alex de Waal is right to argue that ‘After Garang’s death [the] future [of South Sudan] was closed.’

It is my suggestion that SPLM leaders, in government and in opposition, realize that it is time to either take stock or leave. As the Swahili people say, ‘siku za mwizi ni arobaini’ (The thief’s days are forty). And SPLM fortieth day is fast approaching.

But John Garang warned SPLM 30 years ago and I think it is time the current SPLM leaders pay attention. Here is Garang’s voice from the grave:

“There is no meaning of revolution unless it makes our people happy. Unless the masses of our people, as a result, become prosperous: They go ahead, they advance, they get shelter, they get food, they get clean drinking water, they get education, they get health services…unless we provide these to our people, unless the revolution provides this to our people, then the people will prefer the government of NIF [National Islamic Front] that provides salt to the government of SPLM that does not provide salt. This is simple arithmetic. If the SPLA cannot deliver anything and we just shout ‘REVOLUTION! and the cattle of the people are not vaccinated; their children are not vaccinated; there is nothing to eat; there are no basic necessities of life; no clothes in the market; no needle, no razer blade…the barest minimum of things are not available…then the people will drive us into the sea. Even if there is no sea here, they will find a sea to drive us to.”

It is time for SPLM to change for better, leave, or be driven into the SEA. There will be time when the people will not care whether the South Sudanese army or the national security shoots at them. SPLM was a revolutionary movement; it is now a big fat obstacle to the wellbeing of the people. How long do we think the people will be afraid?