Simple Pleasures of Life: When Helping Others Is Helping Oneself

"The student’s comment reminded me of an odd but encouraging comment from a professor who had asked me to give a guest lecture to a class of 600 students two years ago. After having seen students engaged and attentive, he told me, “I wished ..." 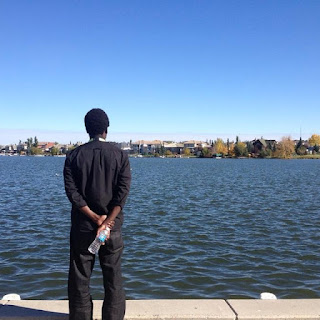 Below are four examples of simple pleasures of life.

Yesterday a former roommate and a friend sent me an email with a title, "You were caught...". She had seen me from a distance walking home from a grocery store carrying some stuff. She was far so she couldn't catch up with me.  She saw me but I didn't see her. That email, I told her in reply, put a smile on my face. She responded: “We have to take pleasure in the simple things.” Indeed!

In life we tend to complicate living for many of us approach life as “will to power”, to use Friedrich Nietzsche’s expression.

About a year ago, I met this African gentleman at a bank in which he works. After we talked for a while, we both realized that we came to Canada through the Refugee Sponsorship program under the World University Services of Canada (WUSC). He was then finishing his undergraduate program and I was in my third year of the doctoral program. He was pleased to hear that I was in a doctoral program because he planned to do his masters and apply for a PhD. I encouraged him to apply.

When he was about to finish his undergraduate degree, he asked me if I could review his personal statement for graduate school application and give him some feedback. I did.

When I met this gentleman a few months later, he was excited to tell me that he has been accepted into the master’s program at York University. He started the program this September. He said, “thank you. Your suggestions were helpful.” About a week ago he sent me a message because he had some questions about graduate research and writing academic papers.  We met and discussed writing and research.

Two East African gentlemen sitting outside a coffee shop in Canada talking about research and writing! Picture that!

Two days ago, a gentleman I have known for nearly two years through a mentorship program in which we were conducting research asked if I could be one of his references as he was applying for a master’s program. I accepted. He said my acceptance to write the reference “made his day.” But I told him writing a reference letter for him would be an honor because of the value of the work he does with the youth.

This morning I received a notification from the university that I have been put down as a reference by the student and that my reference will play an important part in their decision, so [the letter from the associate VP said] it is important for me to take some time and write the reference thoughtfully.

After class this morning a student came to me and said, “thank you, you make this class really interesting. You make students discuss and debate the topics and this makes me want to stay more.” And I was wearing my dad’s “African dress.” Picture that!

Being able to make first year university students engage in class is a challenge for anyone who has taught at a university.

The student’s comment reminded me of an odd but encouraging comment from a professor who had asked me to give a guest lecture to a class of 600 students two years ago. After having seen students engaged and attentive, he told me, “I wished I could teach like you!” This is a professor who has been teaching for more than twenty years. This is why I said it was odd. But it was also encouraging because during the following lecture, he did what I did during the guest lecture. He paused and asked students to engage.

But I could see that the professor was pleased that he reminded me about that guest lecture anytime he saw me on campus. So, when I asked him to be a reference for a job a few months later, he said he couldn’t possibly say no” because of that “guest lecture.”

These simple things in life make a difference. While the people I have mentioned in this narrative believed I was helping them, what they don’t realized is that they are helping me too. There is a lot more in doing things for others then having things done for you. My help is something on which one cannot put a value and that makes the action more helpful to me even more.  It is, as they say, priceless!

This is what makes life simple and interesting. These are things I don’t go out looking for. They come to me. And these are the simple pleasures of life we should not take for granted.

A gentlemen asked me a while ago why I don’t lose it on Facebook when so many “educated” people lose it and lash out at people. I really don’t know what my response to him was, but I believe there are many important and good things life throws at me to brood over insults or concentrate on sordid things people say to or about me.

I will continue to, as my friend said, “take pleasure in the simple things.”

*Kuir ë Garang is the editor of The Philosophical Refugee. He's a researcher, writer, poet and doctoral candidate at York University.