What happened to Canadian federal leadership? 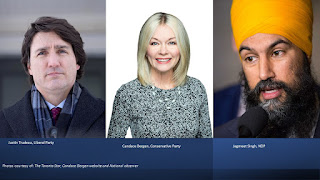 What has happened to leadership in Canada scars and scares me. It has also turned into a trauma of my childhood refugee life and civil wars. I left my family in Sudan as a teenager in search of educational opportunities in a refugee camp in Northern Kenya in 1995.

Kenya, under President Daniel Arap Moi, was relatively peaceful and stable than the Sudan of President Omer El-Beshir. But coming to Canada in 2002 exposed me to a different level of peaceful and stable. Except for the few occasions when fireworks made me look out of the window of my resident at McGill University to ensure that the city is not being evacuated, I felt I was home. Nineteen years later, I’m still to get used to fireworks. But I’m home.

For those of us who know what it means not to be free, Canada means a lot more than what it means to those who were born here. You take it for granted that you are free. You can compare it with what you see on TV; but you have never lived not being free.

Canada offered me both safety and opportunity. It also offered me an opportunity through which I could safely write about issues of leadership and human rights in Sudan and South Sudan. I have always felt safe and lucky. Not anymore. Canada has become a country of either/or.

I feel intellectually cheated, emotionally trapped, and psychologically broken when I see what our Canadian leaders have become. I’m warned by friends and family members not to go to South Sudan for fear of getting arrested or even killed. But I was lucky because I had a home in Canada. But it is traumatizing to see Trudeau sounding like the very leaders I have been criticizing for nearly twenty years now.

When I heard a woman supporting the “freedom convoy” as it passed through Ontario say that immigrants come to Canada because of our freedom, I broke down. I felt like I was back in the refugee camp. That woman and the convoy gave me a voice.

Anytime I see Prime Minister Trudeau on TV I see a reflection of African leaders who think that enforcing laws is leadership. Like European Medieval princes, African leaders have been striving to build countries of single opinions where disagreement is considered enmity.

How did that come to Canada?

But it was only about four years ago that Canada was hailed as the hope of the western world when Donald Trump, who considered simple human decency to be “political correctness”, became president. Trudeau then offered hope, inclusion, and the twenty-first century leadership.

Unfortunately, Canada has become a country where national leaders look into the camera and divide citizens into “Canadians” and the “unvaccinated.” It has become a country in which a prime minister interferes with parental responsibility by looking into the camera and tells children to talk to their parents about vaccines. Vaccines are undoubtedly useful, but a sound leadership would have addressed the problem differently.

The protesters came to the national capital to talk to their leaders; but their leaders refused to even talk to them. Where else in Canada should they have gone? Despite some few misguided individuals among them and the inconveniences they caused to Canadians, these protesters were coming to talk to elected leaders in a democracy.

And yes, yes, some will say that things are different; we are in a pandemic. But the pandemic has killed thousands of Canadians that only a few, if any, need to be reminded about the danger of COVID-19. All Canadians have been affected. But making Canada a country of a single opinion portends a dangerous trend for a post-pandemic Canada.

If the Trudeaus and the Singhs are the calibre of leaders of tomorrow, then Canada needs a new breed of leaders. Siblings are not talking; friendship have unravelled, political divisions have become “medieval tribalism”, and dialogues are dismissed like the proverbial “sleeping with the enemy.”

What happened to my beautiful Canada? Let’s not blame COVID-19 for this is not the first nor will it be the last pandemic as experts tell us. We have the vaccine, but we lack a sound leadership to maximize its usefulness. Vaccines have been politicized. The pandemic would have not got out of hand and Canadian would not be divided in the way they are now if we had leadership. We have a dry power and implementation of rules.

What I have learned for the past twenty hears of writing about leadership and issues of governance in Sudan and South Sudan is the difference between exercising leadership and enforcing rules and regulations. It is easy to enforce rule and difficult to exercise leadership. Quebec Premier, François Legault, has learned this truth.

Enforcing rules and regulations is NOT leadership. Any idiot in a position of power can do that. Ending crises without heavy-handedness is what leadership is. The police in Ontario and Alberta have shown more leadership than our political leaders. They managed to convince some protesters to move trucks. Why can't our leaders do the same instead of doubling down about "we will not be intimidated." This is not about competition. Prime minister Trudeau refused to talk to people who came to talk to him; now Canadians are paying the economic price. They came to talk to their government and their government refused. They came to the capital. Perhaps they should have gone to the NORTH POLE AND talk to the bears!

Like leaders in Sudan and South Sudan, Canadian leaders have confused leadership and power. Leadership is about building consensus in difficult of situations. It is not about counting political victories or about enforcing laws. Any average dictator can exercise power by enforcing laws; but it takes a leader to build consensus about the lives of citizens beyond political longevity.

After 1962 when Canada removed racist immigration policies, Canada has been in the forefront of global leadership.

Unfortunately, Prime Minister Justin Trudeau and NDP leader Jagmeet Singh have failed to understand that leadership is about convincing the few who don’t agree with their ideals rather than expecting the few to magically bent to the will of the majority. That the protesters are all “white supremacists” with “unacceptable views is an insult to pandemic-weary Canadians.

As an individual who has historically suffered (and indeed continue to suffer) the consequences of “white supremacy”, I find it sickening that “white supremacy” is lightly thrown around by someone who wore a black face as an adult and a teacher.

Asked about what he would do about the truckers on Ottawa during CTV’s Question Period with Evans Solomon, Singh equivocated. Instead of outlining his solution to the problem that is now inconveniencing the lives of average citizens in Ottawa, Singh blamed the freedom convoy and the prime minister. For Mr. Trudeau, it is all about winning against the freedom convoy.

Was the prime minster relying on the protesters becoming violent and turning the public sentiment against the freedom convoy? Tough luck!

Kuir ë Garang is the editor of THE PHILOSOPHICAL REFUGEE. He is also a Doctoral candidate at York University School of Social Work and a Part-Time professor at Sheridan College. Contact: kuirthiy@yahoo.com.